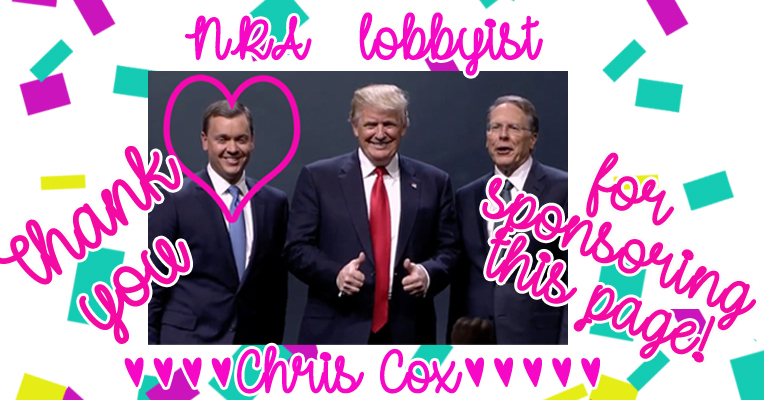 We are so thankful to NRA Chief Lobbyist Chris Cox, whose law firm has helpfully paid for the domain registration for this site, which points out the blood money source of the lobbyist’s wealth.

How did that come to pass? Here is a chronology. Enjoy!

In June, attorneys for Courtney Cox (no, still not the cool Courtney Cox) and her business file a complaint with the World Intellectual Property Organization alleging that an obvious parody site that mocks the contrast between her picture-perfect interior design endeavors and the fucking disgusting source of her family’s wealth is a fraudulent attempt to capitalize on her trademark. Their complaint is a fairly entertaining 20-some-odd page report on their hurt feelings and the allegedly unfair association of Mrs. Cox with the murder/suicide industry that funnels millions of dollars into her family.

The WIPO provides the Cox lawyers with Betsy Riot’s contact information for the filing of the dispute. The lawyers are shocked and in utter disbelief about the address in Fema Camp, Utah, and file an amended complaint complete with screenshots of their searching of Google Maps for Fema Camp, Utah, and conclusion that no such place exists.

Betsy Riot is given a few weeks to respond to this sniveling rich girl hissy fit and decides a better use of their time is to drink tequila and draw chodes on Chris Cox’s face.

In the meantime, the company that registers domain names tells all parties that the domain is set to expire pretty soon and that they are putting it in a “lock” status until the dispute is resolved.

The WIPO appoints a legal expert to adjudicate the case.

Betsy Riot drinks more tequila and finds all of this so fucking hilarious that they post the NRA complaint to the very web site in question, along with an animated gif that says “his dick fell off because a woman wrote words on the internet.”

Cox’s lawyers are absolutely scandalized and well they never and oh my stars and can you even??? So they submit an emergency last-minute addendum complaining that Betsy Riot is now mocking their complaint! Surely this is actionable and must be stopped by the United Nations! They ask WIPO to behold Exhibit A, this image saying “his dick fell off because a woman wrote words on the internet”! 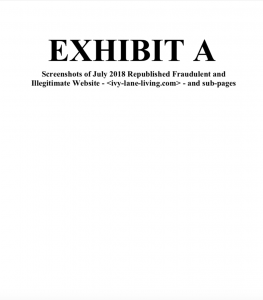 The domain registry company freezes the domain so nobody can touch it anymore. Betsy Riot tries mixing tequila with different kinds of citrus and recommends Meyer lemon.

Cox’s law firm then decides that they are just going to go ahead and pay the fee to register the domain for a year, so they send whatever the domain registry charges (about $15-$30, or up to 2,010 rubles as the NRA would understand it) to pay for the domain registration even though the case has not been decided yet. Betsy Riot imagines this is so some bootlicker at the law firm can assure a very angry NRA lobbyist that they for sure have been working hard on this very important top priority case.

WIPO releases their decision, which boils down to: The Unites States has something called the First Fucking Amendment that protects political commentary, and this is obviously political commentary. Betsy Riot wishes the decision included, “Perhaps you should spend more time reading the other nine amendments in the Bill of Rights, and maybe even the first half of the Second one, you hypocritical dipshit shartcrumpets” but you can’t have everything.

The domain is returned to Betsy Riot, who attempts to pay for the domain registration only to discover that it is still showing up as paid. Betsy Riot asks the domain registration company how to pay, and the company says no worries, you are all paid up and it doesn’t matter if the Cox attorneys are the ones who paid, but maybe you would like to pay them back? So Betsy Riot suggests how the attorneys can request reimbursement (see below). As of today, August 18, 2018, Betsy Riot has received no request for reimbursement from the Cox attorneys and so we thank them most kindly for sponsoring this web site. 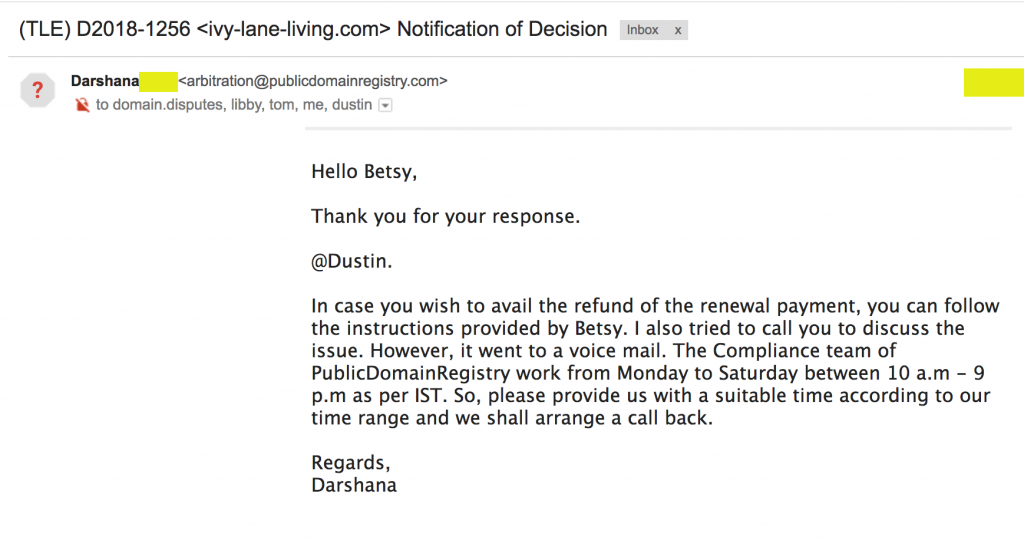 Click here to see the page the NRA Parasite-in-Chief does not want you to see.